Having just completed its tenth year of existence, the Rockledge Community Redevelopment Agency determined that it would be prudent to reexamine its fundamental doctrine, the Rockledge Community Redevelopment Plan. Originally drafted in 2002, the initial Redevelopment Plan outlines a variety of large-scale projects that are now complete, including the expansion of U.S. Highway 1 from four lanes to six lanes, as well as the Barton Boulevard streetscape project. While it is important to recognize these accomplishments, it is also incumbent upon the Agency to ensure that previously expressed goals and objectives are still applicable ten years later. In addition, it was felt that some concepts outlined in the original Redevelopment Plan had become obsolete or implausible. Therefore, in early 2011, the Agency Board of Commissioners authorized staff to proceed with a widespread Plan update.

Under strict adherence to the statutory requirements involved with the process of updating the Redevelopment Plan, in December 2012, by way of Resolution No. 2012-721, Rockledge City Council adopted the revised Community Redevelopment Plan, as well as the boundary modifications that had been proposed. 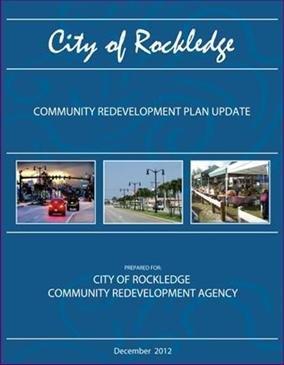