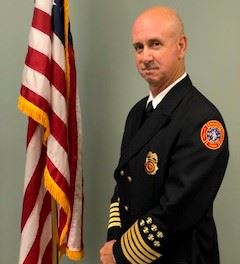 James H. (Jim) Wilson was raised in Brevard County and graduated in 1980 from Cocoa Beach High School. He began his career shortly after graduation and has worked his way up through the ranks. Prior to coming to Rockledge, Jim served as the Division Chief of EMS in Plant City, Florida. He earned his AS in EMS from EFSC (then BCC) and a BS in Management from the University of Phoenix. In addition, he is a graduate of the prestigious Executive Fire Officer’s program through the National Fire Academy, an intensive four year process centered on honing the skills and abilities of the nation’s Fire Department leaders.

Throughout his career, he has been an educator in both Fire and EMS, holds many Fire and EMS instructor credentials and was one of the state’s first Live Fire Instructor Trainers. As a part-time faculty member of the University of Miami, Jim traveled extensively, lecturing on many subjects related to the profession. Recently, he was selected to work as a reviewer for Jones and Bartlett and assisted in the creation of the 11th Edition of the text book Emergency Care and Transportation of the Sick and Injured.

In his spare time, Jim enjoys travel, golf and family time and for the past six years has served as a technical advisor for such television shows as CSI, CSI Miami, Blacklist, and Rizzoli and Isles, among others.

“My philosophy of leadership is fairly basic. You are either a part of the problem or a part of the solution and you should always strive to leave things better than you found them.” - Chief Jim Wilson